Lake of Bays and Huntsville are the perfect destinations from which to explore everything that’s great about Muskoka.

From here you’re an easy drive to world-class resorts such as Deerhurst, famous as the site of Canada’s G8 summit of world leaders in 2010, as well as some of the best open water for boats and personal watercraft. Those who enjoy paddling canoes and kayaks are also spoilt for choice, thanks in particular to the proximity of Ontario’s largest provincially protected wilderness, Algonquin Park, which offers an endless variety of routes and overnight camping opportunities.

The area boasts numerous excellent attractions, too. Perhaps the most famous is the RMS Segwun, North America’s oldest still-operating steamship. Based in the town of Gravenhurst – the ‘Gateway to Muskoka’ – a great time to visit this wonderful old vessel is during the always fun Antique and Classic Boat Show, which draws hundreds of elegant old wooden boats from across the US and Canada.

And, of course, Lake of Bays has its own famous ship: the SS Bigwin, once the property of Bigwin Island, now offers sightseeing trips around the lake. Equally famous is Santa’s Village in Bracebridge, a fun family getaway that’s been drawing the crowds to the summer vacation home of old St Nick for over 60 years now.

And then of course there’s Muskoka’s superb shopping. Any seasoned shopper to the region knows by heart the key places to pick up great souvenirs, gifts and clothing, including Robinsons General Store in Dorset, Muskoka Bear Wear (five locations, including Huntsville), Algonquin Outfitters (also in Huntsville and other locales) and, of course, Yummies in a Jar for sweet or savoury treats.

To learn more of Susan’s favourite things in cottage country, be sure to explore her frequently updated Muskoka Guide.

Top 10 Things To See and Do in Lake of Bays

Whether you’re a full time resident of Muskoka or one of our region’s many cottagers or visitors, you’ll never run out of fun things to see and do here.

One of the most popular destinations in cottage country is beautiful Lake of Bays. Tucked away in the northeast corner of Muskoka, this pristine body of water covers an area of 27 square miles and stretches all the way from the community of Baysville in the south to Dorset in the east and Dwight to the north.

In addition to its beautiful granite shoreline, dense forest cover and abundant wildlife, Lake of Bays is also home to a variety of first-rate tourist attractions, from its naturally rugged landscape to its many man-made features.

To help you get make most out of your time here, use this list of things to see and do in Lake of Bays – enjoy, explore!

Said to be one of Canada’s most prestigious golf courses, Bigwin Island Golf Club has built upon the former glory of the old Bigwin Inn and now offers a variety of exclusive private membership packages, as well as public golf. Designed by legendary golf architect Doug Carrick, Bigwin Island’s par 72-course offers some of the best views available over Lake of Bays, not to mention some of the region’s most memorable golf experiences. While the peak summer months are set aside for members only, it’s well worth booking a round during public play days during May, June, September and October.

Located in the picturesque village of Dorset in the eastern corner of Lake of Bays (and just a short drive from Haliburton), the Dorset Heritage Museum paints a fascinating picture of the area’s rich past, from its early history to the arrival of the first logging camps and pioneer settlers, right up to its becoming a popular holiday destination. Highlights include a First Nations Exhibit, an excellent scale model of the Gilmour Tramway (a 2km long tram that moved some 400,000 up a 90ft gradient), as well as numerous photos and written records to look through. To learn more, visit the museum’s website at www.dorsetheritagemuseum.ca.

No trip to Lake of Bays – or Muskoka, for that matter – should go by without paying a visit to the Dorset Lookout Tower. Offering incredible panoramic views over the rolling hills of Algonquin Provincial Park, Dorset and west across Lake of Bays, this 142m tall observation tower was built on the location of an original 1922 fire lookout tower. Its replacement, built in 1967 as a tourist draw, sees upwards of 60,000 visitors a year, making it one of the region’s leading attractions. If you can, be sure to visit during late September to early October when the Fall colours are at their most spectacular.

As easily accessible by car (it’s close to Hwy 60) as it is by boat, Dwight Beach has long been a favourite swimming spot for families. Stretching some 150 meters along the north shore of Lake of Bays and an easy walk from parking and stores like Dwight Village Market, its clean sand extends into the water itself, ensuring a nice soft bottom for youngsters wanting to splash about as well as for serious swimmers wading out to deeper waters. While there’s plenty of space to spread out and enjoy a picnic, try to plan your visit for a weekday to avoid the crowds.

One of the best ways to really get to know Lake of Bays is to get out on the water and enjoy its lovely shoreline by boat. Visitors can explore the lake aboard a private charter or water taxi service, one of the best being Lake of Bays Boat Tours. The company’s luxurious 27ft pontoon boat – the affectionately named (and extremely comfortable) Vicky J – is used to ferry guests on fun three-hour guided tours from Baysville to some of the lake’s top points of interest. Private tours are also available and can be fully customized to include a lunch or dinner BBQ as well as stopovers at some of the lake’s most secluded swimming spots. A water limo service is also available, providing transportation to and from places like Bigwin Island Golf Club. For further details, visit their website at www.muskokaboattours.ca/ 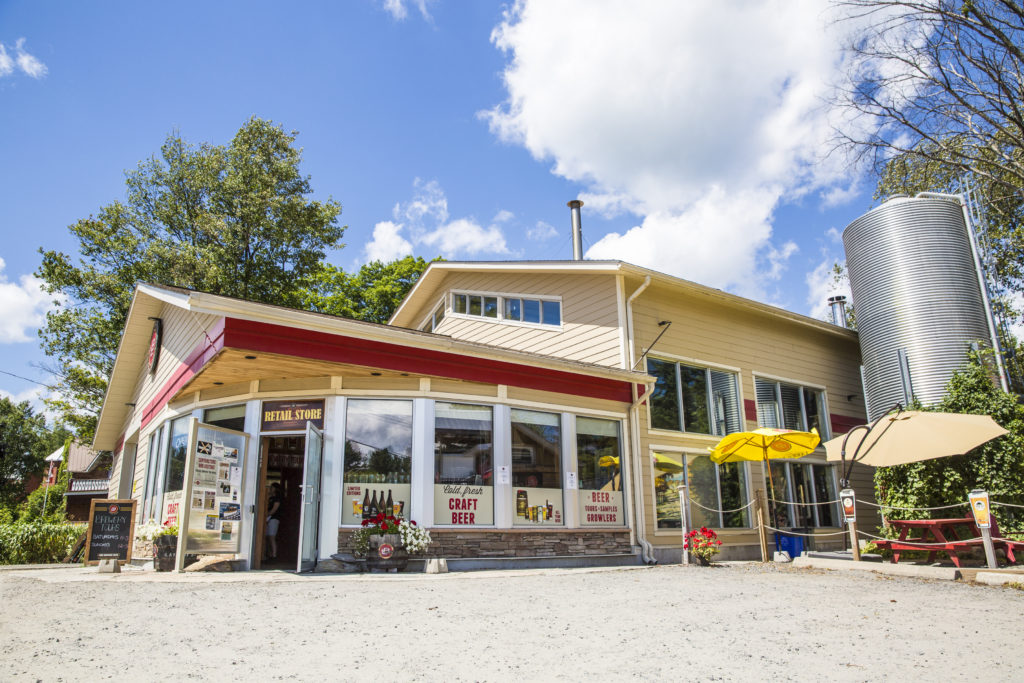 Now in its seventh year of operation, Lake of Bays Brewery has rapidly become one of Ontario’s leading craft brewers. From its humble roots as a hobby of founder Darren Smith to its now being featured in LCBOs, Beer Stores, bars and restaurants across the country, Lake of Bays Brewery has become something of a major Muskoka attraction in its own right. Visit its Baysville premises and you’ll not only be able to sample and purchase their award winning brews (go for the Spark House Red Ale!), you’ll also be able to partake in one of their fascinating behind-the-scenes guided brewery tours. To learn more, visit their website at www.lakeofbaysbrewing.ca.

Widely considered one of the top 10 waterfalls in Ontario, Ragged Falls is one of the most spectacular of the many natural wonders waiting to be explored in Lake of Bays. Part of the lovely Oxtongue River-Ragged Falls Provincial Park, the falls is delightful to visit year round, though for a special treat be sure to visit during the spectacular Fall colours in late September through October. Framed by the rich reds and golds of the many trees lining its length, it’s a sight to behold, especially around Gravel Falls where you can see the glacial melt water flowing at its fiercest. Located close to the western gates of Algonquin Provincial Park, the spectacular whitewater rapids and falls are easy to reach via a short trail leading up from the public parking area.

I’ll never forget reading how Canadian radio star and writer Stuart McLean (host of the CBC‘s Vinyl Café) once said that his favourite experience of Muskoka was “Buying Laurentian Chief moccasins at Robinson’s General Store.” How appropriate, then, to include this Dorset staple in a list of the very best things to see and do in Lake of Bays! Voted ‘Canada’s Best Country Store’ year after year, Robinson’s popularity isn’t just because it’s located next door to Dorset’s LCBO. Family owned and operated since 1921, this sprawling mini-department store today covers an impressive 14,000 sq ft and offers a vast array of goods. Here’ you’ll find everything from grocers to gifts and souvenirs, housewares and clothing, books and games… and, of course, those famous moccasins. 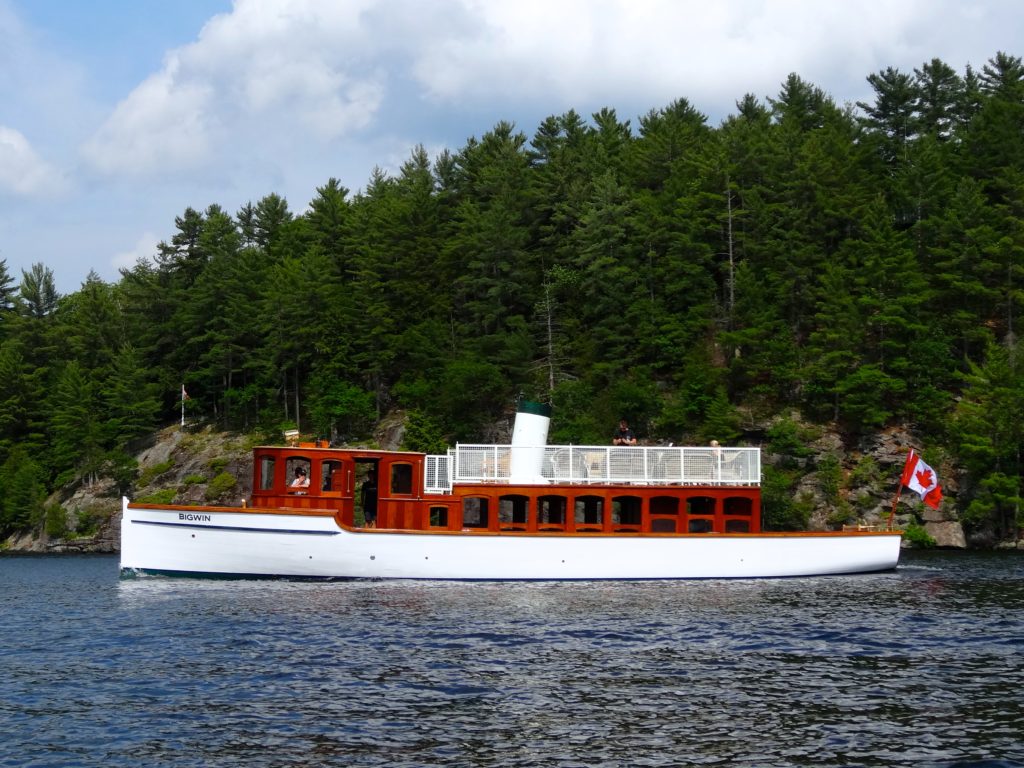 One of the oldest ‘residents’ of Lake of Bays, the wonderful SS Bigwin has been plying the waters here since she was constructed in 1910. Built to ferry the rich and famous to Bigwin Inn, the vessel has since been completely restored and refurbished and now offers regular cruises around Lake of Bays throughout the summer vacation season. Sailing from her berth adjacent the Lake of Bays Marine Museum in Dorset, the SS Bigwin offers a variety of sightseeing cruises, including a special cruise that circles her old home on Bigwin Island. The ship has also become a popular choice for weddings and private functions, too. Also available are a number of fun experiential offerings, such as a popular beer cruise run in conjunction with Lake of Bays Brewery.

Yummies In a Jar and the John Murden Gallery & Studio

Now celebrating its 15th year as one of Muskoka’s leading food brands, Lynn Murden’s Yummie’s In a Jar now boasts two must-visit locations in Lake of Bays: a large 2,000 sq ft gallery on Hwy 117 west of Baysville which she shares with husband (and artist) John Murden, and a seasonal shop located in the heart of Baysville. Open year round, the gallery is one of the best places to shop not just for Lynn’s line of incredible jams and jellies, but for crafts and arts, too. And while there you can check out John’s wonderful original artworks, many of them available as prints, and even have a chance to see him in action in his studio – he’s always willing to share his love of his craft and the Lake of Bays area, something he’s captured so well in his work.